A rising population, increasing urbanisation and an ageing population (15% of the NSW population were 65 or over in June 2014) leads to greater demand for housing, energy and water as well as an increase in waste being generated. The increasing demand for land can also lead to loss of green spaces and greater pressure to develop the urban-rural fringe.

By 2031 the population of NSW is expected to grow to 9.23 million people with the majority of this growth anticipated to be in Sydney. A Plan for Growing Sydney is the NSW Government’s 20-year plan for the Sydney Metropolitan Area, a plan for a sustainable and resilient city with a balanced approach to the use of land resources while protecting the natural environment.

Population growth and urbanisation contribute to environmental challenges in NSW that relate to biodiversity, air quality, water resources, natural hazards and climate change. Increasing populations also lead to greater demand for public transport, more traffic on roads and more goods moving around NSW. Population also drives demand for food, the production of which can impact on the environment. In densely populated areas, waste products, such as solid waste, sewage, hazardous waste and atmospheric emissions place increased stress on natural ecosystems. Planning responsibly for this growth can avoid or minimise these impacts.

Population changes are a critical factor to inform strategic environmental planning. How many of us there are, how fast the population grows or declines and ages, where we live and how we live together, all drive the need for careful use of resources and influence our footprint on the environment.

By 2031 the NSW population is projected to grow to over 9.23 million people, with the majority anticipated to live in Greater Sydney, which may put pressure on the demand for resources including energy and water.

Figure 1.1: Population growth in Greater Sydney* and NSW for the last decade 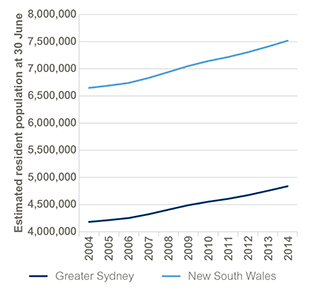 Notes: * Greater Sydney extends from Wyong and Gosford in the north to the Royal National Park in the South; towards the west the region includes the Blue Mountains, Wollondilly and Hawkesbury.
Data for Figure 1.1

About 4.84 million people lived in Greater Sydney at June 2014, representing just under two thirds of the state’s population. Map 1.1 shows population change between June 2013 and June 2014. The largest growth in Greater Sydney between 2013 and 2014 was in Parklea – Kellyville Ridge (up by 2700 people). Large growth also occurred in Waterloo – Beaconsfield (up by 2000 people), Parramatta – Rosehill (1900), Concord West – North Strathfield (1600) and Cobbitty – Leppington (1500). Population decline has also occurred in Greater Sydney, between June 2013 and June 2014 the largest decline was in Claymore – Eagle Vale – Raby (Sydney’s south-west) down by 140 people and Springwood –Winmalee in the Blue Mountains down by 80 due to the bushfires of late 2013 (ABS 2015b).

The population of the rest of NSW (outside Greater Sydney) increased by 24,900 people between June 2013 and June 2014 to reach 2.6 million. Map 1.1 shows that in that period the largest and fastest population growth occurred in the Hunter Valley (excluding Newcastle) which rose by 3700 people (1.4%). Substantial growth also occurred in Newcastle and Lake Macquarie (up by 3500 people), Illawarra, just south of Sydney (2800) and Richmond – Tweed on the far north coast (2200). The biggest decline in population was in Grafton on the north coast which experienced a loss of 180 people (ABS 2015b).

In the last decade the largest declines have occurred in the LGAs of Broken Hill (1050 people) and Moree Plains (950 people). 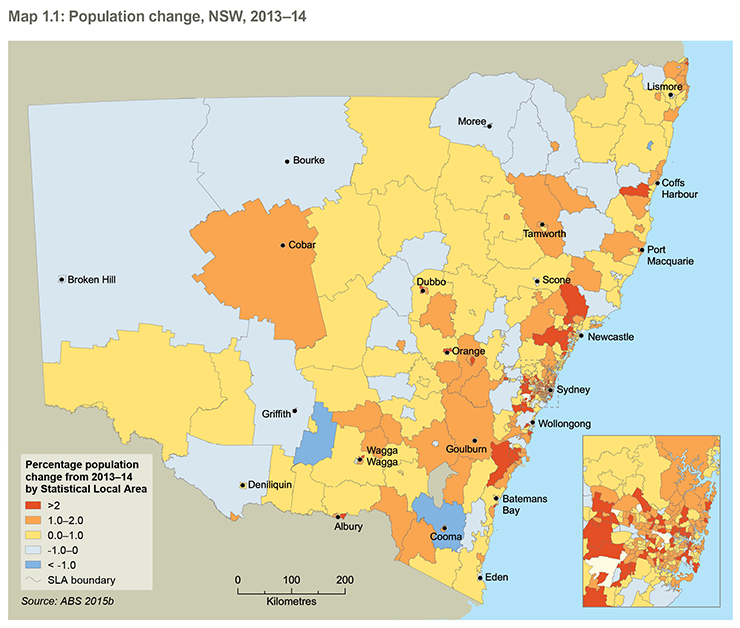 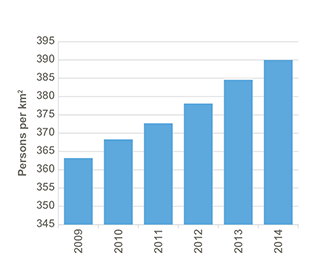 Table 1.2 shows that the average floor area of residential properties has substantially increased since 1984–85. Bigger homes can have negative impacts on the environment as more energy is required to light, heat and cool properties. In the process of constructing homes more waste may be generated, while the demand for more housing and larger housing can lead to conflict with other land uses and encroachment into the urban–rural fringe. 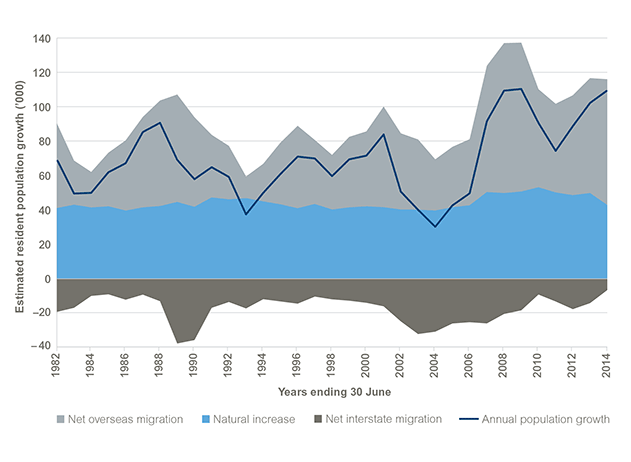 The age distribution of the NSW population continues to shift as a result of changes in fertility rates, increasing life expectancy, and age-specific migration. The population pyramid in Figure 1.4 shows that in June 1981 10% of the population of NSW was over 64 years old and by June 2014 this had grown to 15% of the population. As a result of the ageing population in NSW, household compositions are also changing with older people more likely to live alone or with only one other person. This has environmental implications caused by the need for more housing and flow-on effects from demand for housing materials and energy, water and waste consumption (see Theme 3: Energy consumption, Theme 6: Urban water, Theme 7: Waste and recycling). 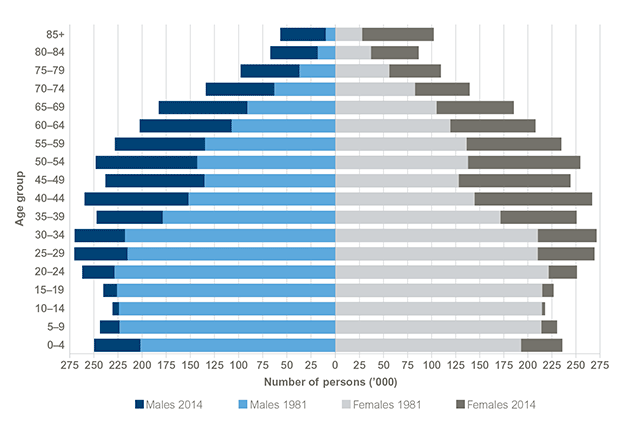 Larger populations create an increased demand on housing supply and increase the demand on potable water, energy and wastewater treatment. They also generate greater urban water runoff and waste. The construction of new residential homes increases construction and demolition waste and can result in the loss of green spaces and wildlife habitats. As urban areas become too densely populated pressure is put on urban fringes, which can encroach onto environmentally sensitive or potentially hazardous areas. For instance, many settlements are located in flood-prone river catchments, with tens of thousands of properties located within a floodplain. A significant portion of these are in the Hawkesbury–Nepean Valley in Sydney.

NSW experiences a range of natural hazards, including bushfires, severe storms and floods. These events cause great financial hardship for individuals and communities, and can sometimes result in loss of life. As our population grows, there is potential for more people, buildings and infrastructure assets to be exposed to natural hazards. While some of the impacts of natural hazards can be mitigated or avoided, risks cannot be completely eliminated.

NSW is now home to greater numbers of older people than ever before. This means a greater demand for aged care facilities and health care services which are often in places outside the main urban areas of the state. An ageing population also poses increased risks from the environment. For example, extreme temperatures can lead to illness and loss of life and increase the cost of transport, agriculture, energy and infrastructure. Heatwaves are also becoming more common and are a significant cause of mortality. This is particularly the case for the vulnerable sectors of society, such as the elderly, the unwell and children.

The growing population of NSW has more complex interactions with the environment that are specifically discussed further in other sections of this report.

A Plan for Growing Sydney

A Plan for Growing Sydney (NSW Government 2014) was released in December 2014. It is the NSW Government’s 20-year plan for the Sydney metropolitan area. It provides direction for Sydney’s productivity, environmental management, and liveability; and for the location of housing, employment, infrastructure and open space. It will be implemented through collaboration between a new Greater Sydney Commission and local government.

Regional plans will guide how a region can achieve sustainable growth and will be developed in partnership with communities, councils and businesses to set the long-term vision and actions needed to achieve the vision.

The regional plans will play a critical role in how natural resources are managed to ensure the prosperity and productivity of the NSW economy, as well as the health of local communities and the environment.

These are long-term strategic planning documents that will consider the population trends for NSW. They also articulate a vision and plan for a range of housing, jobs and infrastructure to meet the needs of a changing population. Importantly, each regional plan will include actions that relate to the environment, tailored to suit each region. Local government and the community will be central to the development and content of the regional plans.

The NSW Office for Ageing published the NSW Ageing Strategy (OA 2012) in 2012. Through this strategy, the NSW Government will work with local councils and Local Government NSW to plan ahead and work strategically in response to population ageing.

A growing population also places greater demands on interment facilities such as crematoria and cemeteries. Population projections indicate a need for the NSW Government to manage and provide for interment facilities. This is reflected by Action 1.11.5 in A Plan for Growing Sydney.