Wetland condition is affected by dry climatic conditions, decreased water availability and changed patterns of water flows as well as catchment land practices. This is being addressed through the management of allocated environmental water (allowances in water sharing plans and adaptive environmental water licences through the purchase of water entitlements from willing sellers and water savings through infrastructure projects), and the implementation of the 2012 Murray–Darling Basin Plan.

Wetlands are important ecosystems because they support high biodiversity. A diverse array of wetland types (lakes, lagoons, estuaries, rivers, floodplains, swamps, bogs, billabongs, marshes, coral reefs and seagrass beds) form habitat for a wide range of animals including waterbirds, fish, frogs, invertebrates, and water-dependent plant species (DECCW 2010a). They are inundated by water on a cyclical, intermittent or permanent basis with generally slow moving fresh, brackish or salt water (DECCW 2010a). Wetlands play a key role in the biogeochemical cycling of trace gases (e.g. methane and carbon dioxide) and nutrients, and they regulate regional hydrological cycles and climate. Important wetland ecosystem services can contribute to regional economies through the provision of estuarine commercial fisheries, grazing and tourism.

Additional significant wetlands in NSW include those mapped under State Environmental Planning Policy no. 14 – Coastal Wetlands (SEPP 14) and others listed as endangered ecological communities under the Threatened Species Conservation Act 1995.

This survey shows (Figure 18.1) that floodplain wetland area across eastern Australia declined in 2014 to below the long-term average (1983 to 2014), and that this decline over time was statistically significant. 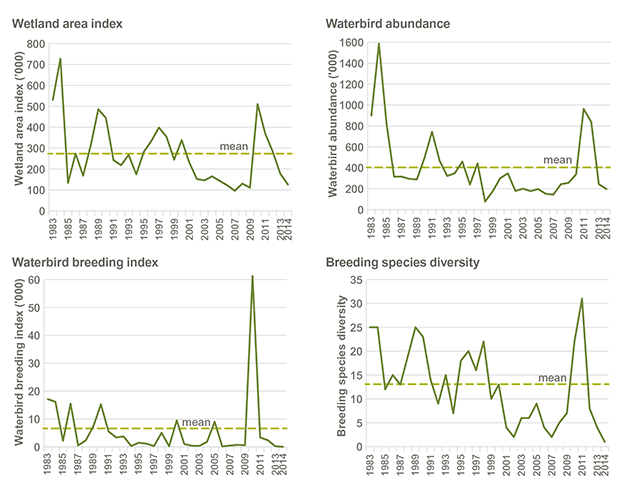 The 2014 aerial surveys showed that the Macquarie Marshes and Lowbidgee wetlands were partially filled by environmental flows, but these were relatively small areas compared to the large flooding years. Most rivers in the Murray–Darling Basin had reduced flows with mostly dry wetland habitat on their floodplains, including the large lakes of the Menindee Lakes (Porter et al. 2014).

During this dry phase, many NSW inland wetland areas, including several not covered by the annual aerial survey, were beneficiaries of environmental water and provided refuges for water-dependent plants and animals.

The NSW Office of Environment and Heritage (OEH) manages environmental water in five valleys in the Murray–Darling Basin (Lower Lachlan, Macquarie Marshes, Gwydir Wetlands, Lower Murrumbidgee and Murray) (see Theme 16: Water resources). Monitoring of wetland vegetation across these valleys indicated an improvement in the condition of wetland vegetation communities compared to that measured at the conclusion of the Millennium drought in 2008 (DECCW 2010b; DECCW 2010c; DECCW 2011a; DECCW 2011b; Wen & Saintilan 2015), in most valleys (OEH 2014). Examples in the largest and most important wetland complexes of NSW where flood-dependent vegetation has responded well to natural flooding and delivered environmental water since 2011–12 include:

However, some areas that have not received adequate water have not recovered to pre-drought conditions (OEH 2014). It is recognised that a NSW wetland inventory to assess condition and extent of all wetland types in NSW would be beneficial in informing the next SoE report.

Wetlands provide important waterbird habitat, supporting breeding and foraging activities. For all waterbird species combined across eastern Australia, the total breeding index from the annual waterbird survey (Porter et al. 2014) was the lowest on record (with a result of 12) and well below the long-term average (6901).

Waterbird breeding species richness was also the lowest on record, comprising one non-game species. Game species abundances were all well below long-term averages, in many cases by an order of magnitude (Porter et al. 2014).

This decline reflects the general lack of suitable inundated habitat and breeding conditions across eastern Australia during this period. Recent research also indicates that migratory waterbird habitat is declining across East Asia (a major stopover point for many migratory waterbird species) and this is likely to be impacting on shorebird populations (Murray & Fuller 2015).

While the aerial survey reported the lowest breeding index on record, waterbird breeding events occurred at a number of inland NSW wetlands that received environmental water in 2013–14. These breeding events resulted in the successful recruitment of a variety of waterbird species including cormorants, egrets and darters. On-ground surveys also indicated waterbird diversity was maintained at these sites (Wassens et al. 2014; Spencer et al. 2014).

Monitoring results also indicate that populations of wetland-dependent fauna, other than waterbirds, are increasing across the state's inland wetlands. An example of this is the vulnerable southern bell frog. With populations expanding into new wetland sites, all indications point to this species making a concerted recovery from the impacts of the Millennium drought. This recovery has been well supported through environmental water delivery to key wetlands (Wassens et al. 2014).

Table 18.1: Extent of wetland types and their inclusion in NSW reserves, 2014

Coastal wetlands included within the NSW public reserve system increased by 1285 hectares in 2012 to 2014. Additions to the reserve system included Everlasting Swamp and the adjacent Imersons Swamp located on the NSW North Coast, 15 kilometres west of Maclean, within the Clarence River floodplain. These sites form one of the largest coastal floodplain wetlands remaining in NSW and are a high conservation priority.

In 2012 to 2014, 6866.3 hectares of inland wetlands were added to the NSW public reserve system. In November 2014, a few thousand hectares of the Gwydir wetlands, 60 kilometres north-west of Moree, were reserved as part of the existing Gwydir Wetlands SCA. The Gwydir wetlands play an important role in the biological and ecological functioning of the Murray–Darling Basin. The Gwydir wetlands also provide habitat for migratory waterbirds, with parcels of the wetlands listed under international treaties including Ramsar, and recognised for their unique assemblages of wetland and floodplain plant communities.

The Gwydir wetlands system exists as a remnant within a highly modified agricultural landscape where remaining vegetation communities are highly fragmented and poorly conserved in NSW. It makes this particular addition to the reserve system valuable for its conservation of biodiversity and landscape connectivity, as well as for the maintenance and restoration of ecological health in this unique inland floodplain wetland complex.

Water availability is the most significant pressure on the health of wetland ecosystems. Altered flows from water extraction and the building of dams, levees and diversion structures has had long-term and ongoing effects upon water availability, especially for important breeding locations such as the Macquarie Marshes and the Lowbidgee wetlands. Wetlands have experienced additional pressures due to prolonged periods of reduced water availability. The strong La Niña events in 2010 and 2011 that produced flooding rains, inundated many wetlands across NSW, and initiated the recovery of wetland vegetation condition and extent from the drying effects of the Millennium drought. The improvement in wetland vegetation condition and extent is continuing to be supported where environmental water can be delivered (OEH 2015).

In NSW, human disturbance of catchments (primarily the clearing of vegetation) has resulted in large increases in the loads of sediments entering wetlands (see the State of the catchments reports for detailed reporting).

Physical disturbances such as mining activity and land clearing within the floodplains of inland NSW have a major impact on habitat quality and extent.

Site-specific studies have identified impacts from longwall mining to upland swamps in the Upper Nepean, Woronora and Warragamba catchments, including changes to site geology, surface and groundwater quality, and changes to ecological features (GHD 2013). Water quality is affected by erosion, flushing of sediment and other products from mining activities. In addition, subsidence can fracture the base of swamps and drain groundwater-dependent ecosystems (GHD 2013).

The introduction and spread of weed and pest species is facilitated by physical disturbances to wetlands, altered flow regimes and drainage, and increased nutrient load. Aquatic weed species in NSW wetlands include lippia, salvinia and water hyacinth (see also the State of the catchments reports).

Introduced aquatic species such as carp and mosquito fish can decimate native fish populations in wetlands and affect water quality.

Trampling and digging by grazing animals has also caused extensive damage to the condition of wetland vegetation, soils, channels and bank structures of watercourses. Many feral animals, such as cats and foxes also prey on small native animals and birds. (See Theme 15: Invasive species for more detail on the spread and impact of weeds and pest animals.)

The NSW Wetlands Policy (DECCW 2010a) promotes the sustainable conservation, management and wise use of wetlands in NSW and the need for all stakeholders to work together to protect wetland ecosystems and their catchments. There are a number of regulations under the Threatened Species Conservation Act 1995 and State Environmental Planning Policy no. 14 – Coastal Wetlands (SEPP14) which have been put in place to help protect wetlands and wetland species.

Water to restore and maintain wetlands

The EWMP evolved from a need to address long held concerns about the health of floodplain wetlands in the Murray–Darling Basin.

The Australian Government is continuing to recover water for the environment across the Murray–Darling Basin to ensure sustainable diversion limits set by the 2012 Basin Plan are met by 2019.

An inventory and enhanced mapping of wetlands across NSW will provide better information on the location and types of wetlands at a statewide level and a more reliable mapping layer for reporting. Many wetlands do not fall into the currently mapped layers. This affects the ability to report on their condition and extent. A wetlands inventory pilot project is being proposed for 2015–16. It will provide greater understanding of the extent and condition of wetlands in selected areas in NSW.