9. Contaminated sites | State of the Environment 2015

Reports of potentially contaminated land have continued to rise, with 166 sites reported between January 2012 and June 2014. At present 332 contaminated sites are being regulated by the EPA and 130 sites have been remediated. There are approximately 860 sites awaiting assessment.

Between 2012 and 2014, 30 new sites were regulated under the Contaminated Land Management Act 1997 and 27 sites were remediated. Service stations accounted for 60 per cent of the newly regulated sites.

The main drivers for the remediation of contaminated land in NSW are the pressures for development and real estate values. Sites in the major coastal cities, particularly Sydney, are readily remediated as land values are high, while rural sites present a greater challenge due to lower land values.

The amendment to the CLM Act in 2009 resulted in a significant increase in sites notified to the EPA. As a result the EPA commenced a backlog program in late 2014 to address the sites still awaiting assessment.

Contaminated land is largely a legacy of historically poor industrial and waste management. Contaminated land can have major economic, legal and planning implications for the community. It can limit land-use potential and increase costs for developers and councils. The investigation and clean-up of contaminated land is important to protect human health and the environment.

Although contaminated sites can occur anywhere, they are typically clustered in areas that have been used for heavy industry or chemically-intensive agriculture.

With the significant decline in manufacturing and heavy industry in NSW since the 1970s (Wilkinson 2007), there has been large-scale redevelopment of these ‘brownfield’ sites. Many of these former industrial areas have been subsequently redeveloped to high density residential areas close to infrastructure, transport and jobs, including the Green Square/Waterloo corridor, Pyrmont/Ultimo and Rhodes Peninsula. Much of this transition has been facilitated by the regulatory and policy framework for managing contaminated sites in NSW.

The NSW contaminated land management framework establishes a system that integrates the environmental and planning processes and comprises two tiers:

The number of notified sites has increased since January 2012, reflecting the increase in the reporting (notification) of potentially contaminated sites to the EPA since December 2009. This increase is due to amendments to the CLM Act that improved the clarity of reporting requirements. These amendments include a more objective basis for the ‘duty to notify’ the EPA of contaminated land. This is based on standard criteria listed in revised guidelines and a more stringent obligation on land owners and polluters to notify the EPA of contamination when they become aware or ought reasonably to have become aware of the contamination. The increased reporting also reflects a greater understanding of the potential implications of land contamination in the real estate and finance industries. 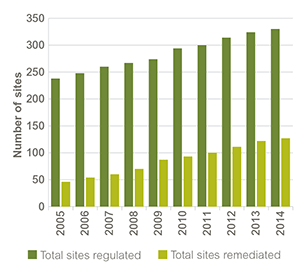 The Protection of the Environment Operations (Underground Petroleum Storage Systems) Regulation 2008 (UPSS Regulation) was introduced in 2008 to address the historical practices that resulted in this industry being the largest single source of contaminated land (Figure 9.2). Results of the EPA’s underground petroleum storage system audit program indicate that across the industry there are varying levels of compliance with the UPSS Regulation. Audits in the Sydney metropolitan area found 48% of sites with UPSS were totally compliant. Of those non-compliant sites, follow-up audits show 26% of sites are moving towards compliance. The major fuel chains are generally compliant while the independent fuel owners and operators are slowly moving towards compliance under the guidance and assistance of the EPA (EPA 2014).

Figure 9.3 shows fluctuations in the number of sites remediated over the last 10 years. The regulation of large complex sites is resource-intensive. Such sites include the remediation of the BHP Billiton (BHPB) Hunter River sediments and residential precincts, such as the Rhodes Peninsula and Breakfast Point. For example, the remediation and dredging for the BHPB Hunter River sediments project cost approximately $400 to $500 million and took more than two years after extensive preparation. It involved the removal of approximately 600,000 cubic metres of contaminated sediments from the riverbed for treatment and storage in a specially constructed cell on Kooragang Island. 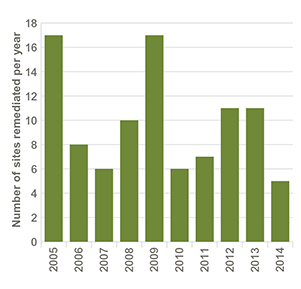 The main driver for the remediation of contaminated land in NSW is development pressure and real estate values. Sites in the major coastal cities, particularly Sydney, are readily remediated as land values are high, while rural sites face a greater challenge due to lower land values.

The extent of contamination below the ground is often difficult to identify and manage. As such, obtaining sufficient information to characterise the risks and costs can be challenging.

Large land remediation projects can consume significant amounts of energy and emit large quantities of greenhouse gases. Since the late 2000s, there has been a global push to embrace sustainable approaches to remediation that provide a net benefit to the environment. Consideration of the principles of ecologically sustainable development (ESD) is an object of the CLM Act.

In order to facilitate the implementation of the ASC NEPM in NSW, it was formally approved under the CLM Act. Other guidelines made under this Act are currently being updated to reflect the changes to the ASC NEPM.

The NSW Government is continuing to implement the Protection of the Environment Operations (Underground Petroleum Storage Systems) Regulation 2008 (UPSS Regulation), a key element of the EPA’s strategy to prevent contamination. However, implementation has been challenging for small operators and those in regional areas. Associated financial constraints have impeded the ability of some operators to comply.

The UPSS Regulation was revised in September 2014 to clarify the statutory requirements for the management and operation of underground petroleum storage system infrastructure in NSW. The amendments removed inconsistencies in definitions that limited the scope of the UPSS Regulation, prescriptions that caused confusion and limited the application of alternative management options, and unnecessary reporting timeframes. The remade UPSS Regulation also aims to encourage innovative solutions and cost effective technologies for leak detection and monitoring systems.

The CLM Act provides for the recovery of costs associated with the administration of statutory instruments to manage significantly contaminated sites in line with the polluter pays principle. A 2014 NSW Auditor-General’s report to Parliament – Performance Audit: Managing Contaminated Sites (Audit Office 2014) – recommended that the EPA should begin recovering costs for sites which require additional administrative work because of their complexity or the non-cooperation of owners and polluters. The EPA is now implementing the cost recovery provisions of the Act. These sites generally involve large polluters that have the capacity to pay the necessary costs to manage the contamination.

High-risk industries targeted under the EPA’s preventative approaches program include car wrecking yards, drycleaners and marinas. The preventative approaches program seeks to reduce the number of contaminated sites in the long term by providing information to these industries about best environmental management practices. The EPA has worked cooperatively with stakeholders, such as industry representative bodies and local councils, to ensure guidance materials are appropriate for these industries. Measures implemented as part of the program include site audits, identification of best practice measures, development and dissemination of educational materials and liaison with industry associations. Future programs will target battery recyclers.

The amendment in 2009 of the notification requirements under the CLM Act resulted in a significant increase in sites notified to the EPA. While an initial screening process is used to prioritise sites that require more timely action, there is a significant backlog of sites awaiting further assessment. The EPA commenced the backlog program in late 2014 to address these sites. There are approximately 860 sites awaiting assessment of which 840 fall within the backlog program (i.e. sites notified prior to July 2013). The program involves the allocation of additional staff to obtain information relating to notified sites and to conduct detailed reviews of this information to determine whether regulation of those sites under the CLM Act is required. The backlog program will significantly reduce the number of sites awaiting assessment.

The NSW Government has implemented a number of programs to address the risks to human health and the environment from contaminated land.

Between January 2012 and December 2014, the Contaminated Land Management Program, funded by the Environmental Trust and administered by the EPA, provided almost $1.2 million in assistance to local governments via six grants for the investigation, remediation and management of former gasworks sites under the Council Gasworks Program. Almost $1.7 million was provided to 10 local governments under the Derelict Underground Petroleum Storage System Program. Notable projects include support for the remediation of the Wagga Wagga Gasworks creek line and the remediation of five contaminated sites for Gunnedah Shire Council in decommissioning petroleum infrastructure and preliminary investigations under the Underground Petroleum Storage System Pilot Program.

In April 2014, the Environmental Trust endorsed a further $6 million funding to the EPA over three years (2014–17). In addition to the areas of funding above, this funding will provide more direct assistance to regional local government areas through a Regional Capacity Building Program to place contaminated site specialists in regional local councils, as well as the Regional Acceleration Program to provide specialists to assist regional notifiers of contaminated land to coordinate the necessary information required to manage the sites appropriately.

The NSW Government has an ongoing relationship with University of Technology Sydney to deliver a set of professional short courses on contaminated site assessment, remediation and management. The short courses aim to build the capacity of environmental consultants, local government officers and members of industry. The courses commenced in 2009 and continues into a seventh year in 2015. Attendance has increased from 44 participants in 2009 to 112 in 2014, with a significant number of participants from local councils in 2014. Participants have reported high levels of satisfaction with the courses and the development of new skills and knowledge.

A series of workshops on contaminated land, the UPSS Regulation and the amendments to the ASC NEPM have been presented across NSW since 2012. These workshops aim to develop a cooperative approach between local government, state government and industry and to foster better regulation of contaminated land in NSW. Feedback from the workshops has been positive and there has been considerable stakeholder demand for further workshops.

The EPA initiated a number of strategic projects in late 2014 in response to the NSW Auditor-General’s performance audit on managing contaminated sites. Notable projects include the development of model procedures for key landholding agencies in NSW for the identification and management of contaminated sites, and a review of the adequacy of the management of historic contamination at cattle dip sites and derelict mines.

The lack of specialist technical skills has been identified as a significant obstacle to preventing and managing contaminated land in rural and regional areas. There are also misconceptions around regulatory liability and a lack of financial and human resource capacity to effectively manage or apply appropriate planning considerations to contaminated lands.

The further rollout of the Contaminated Land Management Program and specifically the Regional Capacity Building Program is critical to increase the capacity of regional councils to manage contaminated land. Direct assistance to regional local councils by employing specialist technical staff to provide regional-specific assistance and capacity building in contaminated land management should result in improved environmental outcomes in rural and regional areas.