Annual greenhouse gas emissions for NSW &ndash; excluding emissions and removals from land usages &ndash; were 146.7 million tonnes in 2013, based on the accounting methodology of the United Nations Framework Convention on Climate Change. This is a decrease of 1% since 1990, 4% since 2000, and 11% since emissions peaked in 2007.

Across most economic sectors emissions have declined since 1990, including mining, industrial processes, agriculture, land clearing and waste. In contrast, emissions from transport have undergone almost uninterrupted growth, with forecasts indicating continued growth. Overall, stationary energy emissions (primarily electricity generation) also rose from 1990, peaking in 2007 and then declining quickly. Together, the stationary energy and transport sectors represent 59% of total NSW emissions, and forecasts indicate the emissions from both will grow in the future.

To help meet its goal of increasing use of lower emissions energy sources and improving energy efficiency, the NSW Government is implementing the NSW Renewable Energy Action Plan and the NSW Energy Efficiency Action Plan. It continues to support a national Renewable Energy Target and the Greenhouse and Energy Minimum Standards initiative; along with a suite of other actions to improve energy efficiency and lower power emissions. The NSW Government maintains biofuels mandates as a means of increasing use of lower emissions energy sources in the transport sector.

Temperatures in the Australasian region are already rising quickly to their highest levels in more than a thousand years (Figure 5.1). Since 1910 Australia’s climate has warmed by 0.9°C, extreme fire weather has increased and rainfall patterns have changed (BOM & CSIRO 2014).

It is the view of most scientists that the dominant cause of recent warming has been human-induced greenhouse gas emissions and not natural climate variability (BOM & CSIRO 2012).

Greenhouse gases in the atmosphere, along with physical processes such as solar heat absorption by vegetation, oceans, atmospheric dust and other dark materials, act to maintain an average global surface temperature of about 14°C, which would otherwise be about –20°C (IPCC 2007, p.946).

Changing greenhouse gas concentrations will alter the heat balance of the atmosphere. For most of the past 2000 years, global atmospheric concentrations of greenhouse gases have been fairly stable and only since the Industrial Revolution (c.1750) have they increased significantly. This trend is also seen in the Australasian region (Figure 5.1).

The increased use of fossil fuels since the mid-18th century, along with agricultural and land-use changes, and other activities, have led to a build-up of greenhouse gases, such as carbon dioxide (CO2), methane, nitrous oxide, ozone and manufactured gases like chlorofluorocarbons (IPCC 2007; CSIRO 2011). This has resulted in extra heat being trapped by the atmosphere, showing up as an increase in global surface temperatures (IPCC 2007, p.4). In terms of both volume and effect, CO2 is the largest single contributor, being responsible for approximately 63% of the change in the climate observed since pre-industrial times (CSIRO 2011). 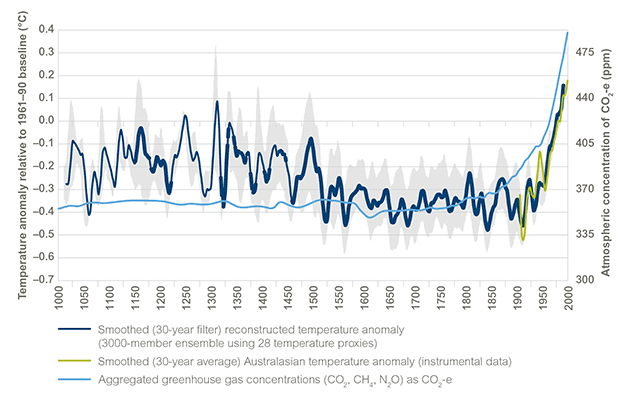 Source: Gergis et al. in revision; CSIRO data; Hartmann et al. 2013, Table 2.1
Notes: This temperature reconstruction is based on 28 temperature proxies from the Australasian region and was generated using multivariate principal component regression. The most reliable periods of the reconstruction are shown by the thick sections of the dark blue line with less reliability indicated by the thin dark blue line. The light green line represents the instrumental data. Statistical error bands from the regression analysis are shown in light grey.
The light blue CO2-e line is composed of the sum of the atmospheric concentrations of three main greenhouse gases (CO2, CH4, N2O; as measured in ice cores from Law Dome, Antarctica) multiplied by their individual radiative efficiencies relative to CO2.
Data for Figure 5.1

Across the international Greenhouse Gas Reference Network concentrations of CO2 are observed to be about 2–3 ppm higher in the northern hemisphere (e.g. at Mauna Loa in Hawaii) compared to those in the southern hemisphere (e.g. at Cape Grim in north-west Tasmania). Mauna Loa data shows carbon dioxide concentrations are now increasing at about 2 ppm per year, with monthly mean values exceeding 400 ppm in 2014.

The last time that CO2 concentrations were comparable to these modern levels was 10 to 15 million years ago, when the world climate was, on average, 3 to 6°C warmer than at present and sea levels were much higher (Tripati et al 2009; Allison et al. 2011).

In 2010, global anthropogenic greenhouse gas emissions reached 49 ± 4.5 GtCO2-e (gigatonnes of CO2 equivalent) (IPCC 2014). Fossil fuel (coal, oil and gas) combustion and industrial processes contributed about 78% of the increase in emissions of CO2 from 1970 to 2010 (IPCC 2014). Economic and population growth continued to be the key drivers of increases in CO2 emissions around the world (IPCC 2014).

Using the same accounting methodology as the Intergovernmental Panel on Climate Change (IPCC) and United Nations Framework Convention on Climate Change (UNFCCC), 549 Mt CO2-e of greenhouse gases were emitted in Australia during 2013 (DE 2015a). This makes Australia one of the highest per capita emitters of greenhouse gases in the world (IEA 2011, pp. 97–99). Australia’s per capita emissions for fuel combustion (16.7 tonnes CO2-e per person in 2012), were significantly higher than the Organisation for Economic Cooperation and Development (OECD) average and the non-OECD average of 9.7 and 3.2 tonnes CO2-e per person respectively (IEA 2014, p.84).

Emissions from the combustion of fossil fuels account for 66% of NSW emissions, with a further 10% from coal mining emissions (Figure 5.2).

Stationary energy emissions (primarily fuel combustion for electricity and other gas use) increased by 9% since 1990 in NSW, which reflects population and economic growth. This increase is tempered by: 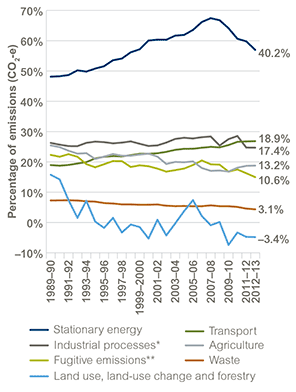 Electricity generation and use in NSW is expected to resume growing, albeit slowly (see Figure 5.3, and Figure 3.4 in Theme 3: Energy consumption).

The transport sector is the fastest growing component of NSW-generated greenhouse gases. This reflects the importance of motor vehicles for both passenger and freight transport within the state. Although transport energy consumption was relatively stable from 2010–11 to 2012–13 (see Theme 3: Energy consumption), the transport sector is, nevertheless, a significant source of greenhouse gas emissions for NSW because of its growth rate and the size of its contribution to total emissions, which was 18.9% in 2013. 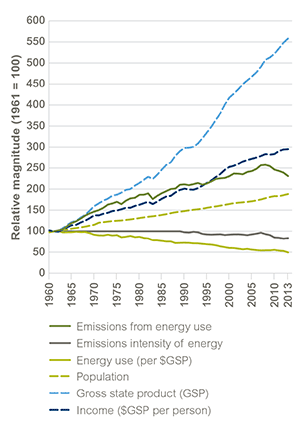 With the first Kyoto Protocol commitment period (2008–2012) at an end, emissions estimates from LULUCF activities have been finalised. This has involved accounting for (for example) reafforestation undertaken since 1990, but re-cleared before 2012. This reveals that this sector has gone from being a net generator of emissions, to a net sink for emissions.

The Copenhagen Accord declared that deep cuts in emissions are required to hold the increase in global temperature below 2°C (UNFCCC 2009). In effect, world-wide emission reductions of around 5% per year would be required. This corresponds to limiting cumulative, post-1750, emissions to the equivalent of one trillion tonnes of carbon (Raupach et al. 2011). Business-as-usual activities will see the trillion tonne level exceeded in about 35 years (CSIRO 2011, Ch. 2).

In recent years, electricity consumption has declined in NSW due to a variety of economic factors, such as increased local generation by residential and commercial users and improvements to energy efficiency (see Theme 3: Energy consumption). If these factors continue they should produce a gradual disconnect between emissions from the energy sector and economic and population growth (Figure 5.3). Nevertheless, population and economic growth from 2014–15 to 2024–25 is projected to be sufficient to grow electricity demand at 1% per annum (see Figure 3.4 in Theme 3: Energy consumption).

A large part of the emissions expected over the next few decades are already locked in, as much of the energy generation infrastructure has a decade-long economic lifespan (Davis et al. 2010); unless the (as yet unproven) carbon capture and storage technologies can be reliably and economically implemented. However, the early decommissioning of older, less efficient, power stations may be facilitated by the rate with which end-users adopt new (low or zero emission) generation capacity, as well as energy efficiency improvements.

Conversely, economic and policy factors can conspire to increase emissions. For example, NSW imports about 10% of its power from other states via the National Electricity Market (NEM). Compared with NSW, the other members of the NEM commonly use brown coal for power generation, which is cheaper, but more emissions-intensive than black coal. Following the abolition of the federal carbon price, early indications are that the NEM’s average carbon-intensity has increased (Pitt & Sherry 2015; Hannam & Arup 2015).

Demand for gas is forecast to decrease at an average annual rate of 1.8% over the next five years (AEMO 2014a). With residential gas consumption growing, the decrease in total gas demand is driven by industrial closures and declining gas-fired electricity generation. 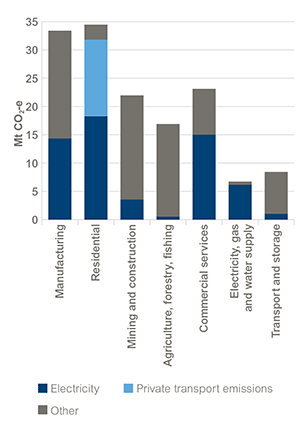 Source: OEH estimates based on Australian Department of the Environment data
Data for Figure 5.4

The NSW Energy Efficiency Action Plan (EEAP) (OEH 2013) aims to implement measures that will reduce the cost of consumers’ power bills and improve economic performance. The EEAP contains 30 actions to grow the market for energy saving products and services, and to position the NSW Government to lead by example. Actions include:

The NSW Climate Change Fund, established in 2007, has been a key funding mechanism for EEAP and related programs (see also Theme 3: Energy consumption).

The NSW Government also supports various state and national standards that are coordinated through the Council of Australian Governments (COAG), such as:

As at July 2015, around 325,000 households and small businesses across NSW had solar photovoltaic (PV) systems with a capacity of more than 960 MW (Clean Energy Regulator data). Wind power is also expected to be the main new source over the next decade, with 3.98 GW of new wind generation forecasted to be connected to the NEM power grid by 2020, half of which is planned for installation in NSW (AEMO 2014b).

The NSW Government also has policies beyond these plans that help reduce greenhouse gas emissions from energy, which include mandating biofuel supply in NSW to help support the development of a market for cleaner and alternative fuels. Biofuels, such as ethanol and modified vegetable oil (biodiesel), can reduce greenhouse gas emissions, create jobs in regional NSW, help farmers, and reduce reliance on foreign fuel imports.

In addition, government actions to support public transport use can help to reduce energy use and greenhouse gas emissions from the transport sector (see Theme 4: Transport).

Through the $100 million Coal Innovation NSW Fund, the Government is carrying out research, development, demonstration, and public awareness raising of low emissions coal technologies. Research and development projects funded include:

In addition to carbon capture from electricity production, careful land management can avoid greenhouse gas emissions or sequester (store) carbon in the plants and soil. It can also protect biodiversity and maintain landscape values.

As public lands in NSW (around half the state) store about 1.5 billion tonnes of carbon, the NSW Government is working to improve the management of carbon across all public lands (e.g. see NSW LC 2013).

The Australian Government’s Emissions Reduction Fund provides incentives for storing carbon in the agriculture and forestry sectors as well as emissions avoidance across the economy. This program now integrates the former Carbon Farming Initiative that ran between September 2011 and December 2014.

Research and development into cost-effective technologies continue to help reduce emissions, for example:

There are opportunities within the agriculture and forestry sectors to mitigate greenhouse gas emissions through practice changes that are both profitable and sustainable.

Key opportunities being investigated by NSW DPI in conjunction with the Australian Government include: