Why we need vapour recovery at service stations

The petrol vapours from vehicles and service stations are a big contributor to poor air quality in NSW. Petrol vapours contain Volatile Organic Compounds (VOCs) including benzene, xylene and toluene. When these VOCs are released into the air and heated up by the sun they contribute to increased ozone pollution in the atmosphere (commonly known as smog), which can impact on human health, especially for those with pre-existing respiratory conditions.

Increased ozone in the atmosphere also impacts on the environment by increasing surface and air temperature and contributes to the general warming of the planet.

The Greater Metropolitan Area (GMA - means Sydney, Wollongong, Central Coast and Newcastle) of NSW generally experiences higher ozone levels compared to other areas of the state because of its population density and the number of sources contributing VOCs into the atmosphere. The meteorology and topography of the Sydney basin also influence how these emissions move through the air at different times of the year. For example during summer, warm still conditions will see the vapours stay closer to the ground for longer periods.

To help reduce petrol vapours and manage the impact of ozone in NSW, the EPA has been working closely with industry stakeholders to implement vapour recovery (VR) requirements at petrol service stations across these metropolitan areas of New South Wales.

What is vapour recovery?

Vapour recovery control equipment aims to capture petrol vapours before they enter the atmosphere. They are designed in two stages – VR1 and VR2.

Over the last 20 years, VR1 and VR2 has been successfully introduced across the United States, Europe and in many parts of Asia to reduce air pollution from petrol service stations.

Around 1120 petrol service stations from Port Stephens to Shoalhaven and west to the Blue Mountains have been required to install VR1 or upgrade their bowsers to VR2 technology. When fully implemented this initiative will reduce VOC emissions from service stations by approximately 5000 tonnes each year.

While VR1 technology has been required in the Sydney Metropolitan Area since 1986, the Protection of the Environment Operations (Clean Air) Regulation (the Regulation) expanded VR requirements and locations from Port Stephens to Shoalhaven and west to the Blue Mountains. 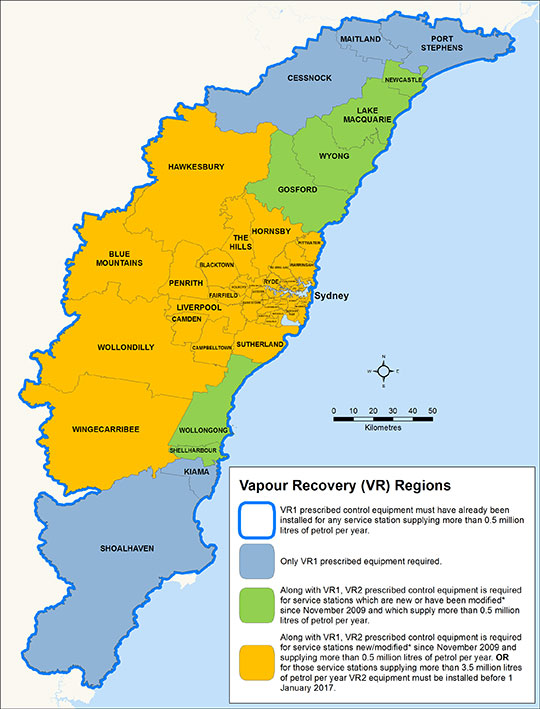 Under the Regulation existing petrol service stations located in the Sydney, Central Coast, Illawarra and Lower Hunter regions (VR1 zone) supplying more than 0.5 million litres per year are required to have VR1 installed and operating. Smaller petrol service stations supplying less than 0.5 million litres of petrol per year in these regions are exempt from this requirement.

Existing mid-sized petrol service stations supplying over 3.5 million litres of petrol a year and located in the Sydney Metropolitan Area B (orange zone) had until 1 January 2017 to install VR2. Existing service stations supplying less than 3.5 million litres of petrol a year are not required to install VR2, unless they are 'new' or are 'newly modified'* after 13 November 2009.

Any large petrol service stations in the Central Coast, Newcastle, Sydney and Wollongong metropolitan areas (green and orange zones) supplying more than 12 million litres of petrol a year, require VR1 and VR2 to be installed and operational.

Vapour recovery control equipment should not be connected to diesel and ethanol rich fuel tanks (greater than 50% ethanol blend).

The EPA is continuing to manage non-compliant VR sites and support councils in the transition process until 30 June, 2017.

In March 2017, the EPA hosted a second round of VR workshops in Parramatta and Hurstville. The EPA may hold additional workshops based on demand.

The local government “toolkit” resource pack (USB) has been sent to all Councils in the VR zones. The USB contains the VR Toolkit and compliance details of petrol service stations in each council area. This resource should assist Councils when undertaking their VR regulatory responsibilities.

Reporting of significant faults to the EPA is no longer required as final monitoring and testing requirements have been adopted.

Regulatory responsibility for service station vapour recovery was moved to local councils on 31 January 2017. The NSW EPA Standards and Best Practice Guidelines for Vapour Recovery at Petrol Service Stations 2017 (PDF 807KB) have been updated to require that commissioning reports be provided to local councils.

All faults and rectification activity will continue to be required to be recorded in the log book.

It is the responsibility of the occupier to ensure appropriate checks and maintenance records are kept in the onsite log book or be made available to an authorised officer within 3 days if records are kept off site.

Occupiers are required to contact their installer/repairer if significant operational difficulties occur.