Most softwood timbers must be treated to prevent them from being attacked by fungi and insects. Fungi will cause the timber to rot while insects will damage and weaken it.

Three types of fungi destroy wood: brown, white and soft rot. Fungi spores are in the air but only take root and cause decay if the moisture content of timber is more than 20% and less than 60%.

Subterranean termites – also known as white ants – cause the most damage to timber in NSW. They live underground or in mounds, and build mud tunnels so they can access timber to feed on the cellulose it contains.

Some beetle larvae feed on timber. One family of beetles, the lyctids, may live over a year inside their wood food source before emerging as adults through small ‘shot’ holes. Sometimes fine wood dust (frass) can be found on horizontal surfaces below the holes. 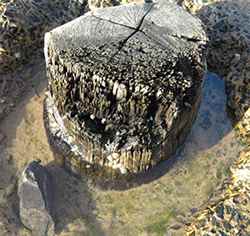 Marine borers include shipworms (Teredo navalis), which are molluscs that grow up to 45 cm long.

Isopods also attack wood immersed in seawater. They are much smaller, only about 3 mm long, and look like slaters. They attack timber in large numbers and eat it away, layer by layer.