Air pollution is caused by

The main types of air pollution of concern in NSW are ozone pollution and particle pollution.

The major human-related sources of VOCs and NOx in NSW include emissions from industrial facilities, power stations, motor vehicle exhausts and fumes from engines in garden equipment and recreational boats as well as paints, aerosols and solvents used in homes and businesses.

Particle pollution is a mixture of small particles and liquid droplets suspended in air.  It is made up of a complex range of components including nitrates, sulphates, organic chemicals, metals, as well as soil or dust.

Key sources of particle pollution include

During the cooler months of the year, cold air can trap this pollution close to the ground where it is seen as a layer of brown haze.

Particles can be referred to in a number of different ways depending on their size and composition. 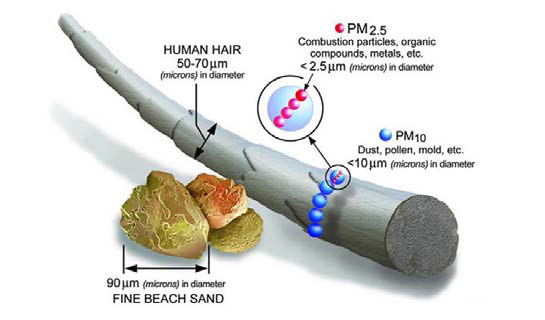 The graphic shows how small PM 2.5 and PM10 particles are when compared with a human hair (reproduced with permission from the US EPA, Office of Research and Development)

Geography and weather influence the concentration and dispersal of air pollution. In Sydney, for example, the city’s basin shape can trap air pollution. In summer, cool overnight air drains from the hills towards the sea, picking up pollution from vehicles, industry and homes. Morning sea breezes then push it back over urban areas where it collects more pollution and creates smog.

This weather pattern can be repeated for days at a time, until rain or strong winds clear the pollution away.

Smog-forming ozone pollution can cause breathlessness, respiratory difficulties, chest pain, irritation of the airways and congestion.

Particle pollution can pass through the throat and nose and enter the lungs, where the particles can cause respiratory and circulation problems, particularly in older adults, children, and people with existing health conditions. (Read more on particle pollution health impacts.)

Air pollution levels in NSW are continuously monitored by the Office of Environment and Heritage (OEH) through the NSW ambient air quality monitoring network. Data from the network is updated hourly and is publicly available on the OEH website at Current and forecast air quality.

The Ambient Air Quality NEPM standards were updated in 2015 to include more stringent reporting requirements for particles.