Blue pine has been treated with synthetic pyrethroids to resist borers and termites. The treatment is usually water-based, and better for the environment than many other treatments. 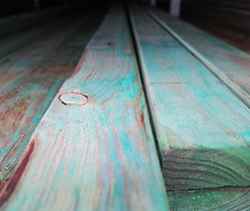 Pyrethrins were developed from chrysanthemums and have long been used in household insecticides.

A synthetic range, known as pyrethroids, is used to kill insects and to make flea collars for dogs and cats. The treated timber industry often uses the pyrethroids bifenthrin and permethrin.

The preservative is usually water based. It is known as an envelope treatment because its effectiveness relies on the treatment surrounding the timber – it does not need to penetrate it deeply.

Some laminated veneer lumber (LVL) uses synthetic pyrethroids as an envelope treatment or as an addition to the glue solution that binds the timber together. Sometimes these beams are dyed yellow.

Another preservative, imidacloprid, is also now being used to make blue pine in Australia.

Red pine is used in northern Australia and sometimes in NSW. It impregnates the timber, rather than being an envelope treatment.

Hazard level of blue pine: H2 (south of the Tropic of Capricorn).

Typical uses of blue pine: South of the Tropic of Capricorn, blue pine is used in dry situations indoors and above ground. It is used for purposes such as