The EPA’s rapid response this year was put to the test with two large-scale incidents. Fire broke out onboard the ship MV Iron Chieftain at Port Kembla in June, and a devastating bushfire struck the town of Tathra in the state's far south in March. 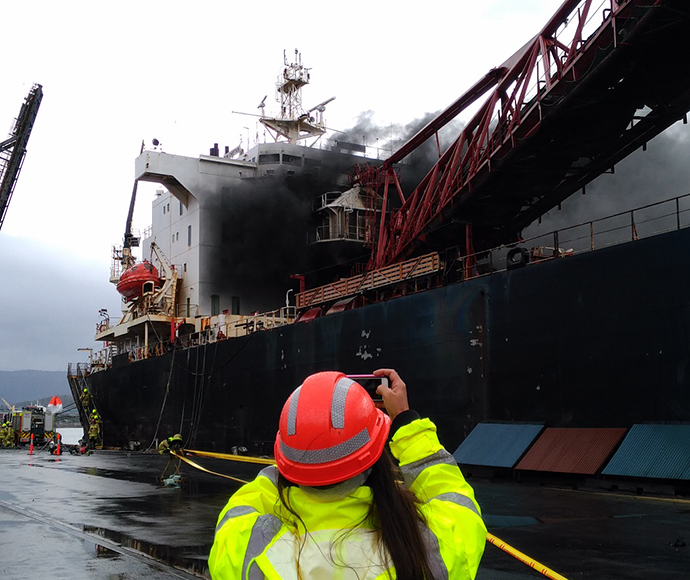 When fire broke out on board the Australian-registered vessel MV The Iron Chieftain while it was berthed at the Bluescope Steelworks, Port Kembla on 18 June, a quick and collaborative response involving Fire and Rescue NSW (FRNSW), the EPA and the Port Authority of NSW followed. During the incident, a conveyor belt that was unloading dolomite ignited and fire quickly spread to engulf the ship’s control room and on to the lower decks.

FRNSW were the first to be notified of the incident, and, as part of their emergency response, FRNSW contacted the EPA. FRNSW, along with the Port Authority of NSW, worked to combat the fire and deployed a containment boom around the vessel to stop debris and oil spreading in the Harbour, and potentially damaging the environment. Six days later, FRNSW declared the vessel to have been rendered safe, and control was transferred to Police to investigate the matter.

The incident generated significant quantities of waste heavy fuel oil and wastewater containing fire-fighting foams that needed to be managed. The EPA served a Clean Up Notice on the vessel’s registered owner, CSL Australia.

Throughout the incident and recovery phases, the EPA has worked closely and collaboratively with FRNSW, the Port Authority of NSW, the Australian Maritime Safety Authority, CSL, Bluescope and the appointed salvors, to ensure the risks to the environment are minimised.

Non-asbestos debris from the Tathra bushfire

The EPA was on the ground in March to provide practical support and advice after a large bushfire tore through the town of Tathra on the far south coast of NSW. The bushfire destroyed 65 homes and significantly damaged 20 other homes.

EPA staff worked with Bega Valley Shire Council and other state agencies to restore essential services, help the community get back on their feet and ensure the area was cleaned up quickly and safely, including managing the safe disposal of asbestos from buildings that had burned down.

More than $10,000 was donated to the people of Tathra through a campaign making the Tathra Bushfire Appeal the nominated charity for Return and Earn.

The bushfire appeal was added to the list of charitable funds which the public could donate to through reverse vending machines across the state.

The people of NSW rallied behind the cause, donating $8,400 - the equivalent of 84,000 cans and bottles recycled across NSW. An additional $2,000 was donated by TOMRA Cleanaway.