EPA’s Andreas Stricker on site at the Pambula oil spill

Pambula Lake, on the far south coast of NSW, is home to six oyster farms as well as a boat repair facility. The spill of 9 October 2018 caused the entire lake to be closed for six weeks in the busy period before Christmas, directly affecting these oyster farmers.

It is alleged that the source of the oil spill was a boat moored at the boat repair facility. 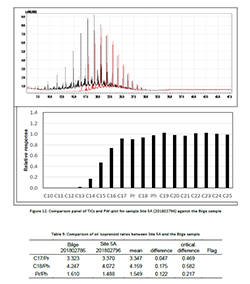 Finger printing of oil samples collected by the EPA was performed by the Office of Environment and Heritage (OEH) Labs, matching oil found on the bilge of the suspect boat with oil collected from the spill. This evidence was critical in finalising the investigation.

Roads and Maritime Services (RMS) recently issued a $15,000 penalty notice to the boat repair firm for allowing a large amount of diesel to enter Pambula Lake.

Local oyster farmer Peter Ferguson praised the actions of all the agencies who responded to the incident and said it was nice to know that the agencies were able to respond quickly, even in a remote area.

This well-coordinated response is an outstanding example of not only the EPA’s incident, emergency and regulation systems working well but also the great teamwork shown by NSW agencies and Bega Valley Shire Council.