Welcome to EPA Connect’s information marketplace with news of events, community outreach and other EPA activities.

Don’t be a dumper – Action Plan to tackle charity dumping

NSW charities are often left with costly clean-up bills when donated items are either unsuitable for sale or are left outside donation bins or shopfronts, where they can be destroyed by bad weather or vandals.

“For a donation to count, it needs to be a good quality item that is not stained, damaged or broken. A good rule of thumb is if you wouldn’t give it to a mate, don’t donate it,” Carmen Dwyer, EPA Executive Director Waste Operations, said. 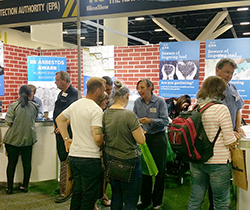 The EPA promoted environmental protection and partnerships at several events and forums over the past month. The contaminated land and waste teams set up stands at the Local Government NSW Conference at Warwick Farm and the popular Sydney Home Show at Darling Harbour. Information on safety around lead and asbestos and NSW Government’s waste management initiatives were hot topics.

The EPA and partner Love Food Hate Waste team also sponsored the Australian Association of Environment Education NSW ActiveNature conference at Kirrawee High School with over 150 delegates attending from around the state – including Silver-Logie winner, gardener and eco warrior Costa!.

In the Hunter, two events attracted interest in the EPA’s work – LivingSmart Forum on 28 September and the Biodiversity Day on 3 October which placed the spotlight on the consequences of illegal dumping, particularly on native habitat. The EPA’s latest guidelines on illegal dumping are out now and there will be more information in the next edition of EPA Connect.

Fifty finalists for the 2019 Green Globe Awards were announced in October, with winners to be announced at a gala event in late November.

The awards recognise people, projects and organisations inspiring leadership, commitment and innovation in sustainability across NSW, and are run by the NSW Department of Planning, Industry and Environment (DPIE).

The survey will take you around 10–20 minutes to complete and asks you for information on animals you have seen in your local area and in other parts of NSW over the past two years.

Stay up to date with the EPA and join the 3,600+ people who are following the EPA on LinkedIn and Twitter