The EPA is holding polluters to account to protect the environment and human health. Our robust regulatory action recently realised the highest fine for pesticide misuse, a successful prosecution of Sydney Water for sewage pollution into the Lane Cover River and a guilty conviction for a company where an ammonia leak sent their staff to hospital. 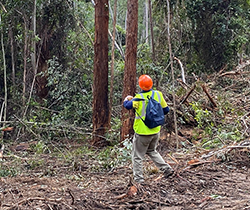 The EPA's operational and regulatory officers are always out and about

The NSW Land and Environment Court has convicted and ﬁned a Central Coast man $48,000 after another man almost died when he consumed a pesticide stored incorrectly.

Mr Warwick Ronald McInnes was prosecuted by the EPA after a 22-year-old autistic man accidentally drank the highly toxic weedkiller Paraquat, which Mr McInnes had illegally stored in a Coca-Cola bottle and left in a disabled toilet at a sports ﬁeld at Mangrove Mountain, in August 2017.

Sydney Water has been convicted and penalised a total of $145,000 over sewage pollution in the Lane Cove National Park and Lane Cove River, following prosecution by the EPA.

In July 2018, around 64,000 litres of untreated sewage overflowed from a maintenance point in Lane Cove National Park at North Epping and was subsequently flushed into nearby bushland, a local creek and the Lane Cove River as Sydney Water technicians attempted to clean-up the discharge.

Instead of removing the sewage that remained in the bushland and creek, Sydney Water washed the raw sewage into the Lane Cove River.

When handing down the penalty in Land and Environment Court, Justice Pain said “Sydney Water could reasonably have foreseen the likelihood of harm and greater risk to human health (both unquantifiable) of opening the mains water valve on 29 and 30 July 2018, before adequate clean-up took place.”

Sydney Water was ordered to pay $127,000 of the $145,000 penalty to the Lane Cove National Park Bush Regeneration Project. It was also ordered to pay the EPA’s investigation costs of $24,369 plus legal costs and to publicise its convictions in the Sydney Morning Herald, Daily Telegraph, local newspaper and on social media. Read more

The Land and Environment Court has found Bartter Enterprises Pty. Limited guilty of discharging ammonia gas during upgrades to a poultry processing facility at Beresﬁeld NSW that caused the evacuation of an adjoining processing building, and hospitalisation of staff.

The EPA commenced the prosecution after 17 people were treated by ambulance onsite and a further nine employees were transported to hospital and treated for chemical exposure following the incident at the facility in mid-2018.

The Court found the defendant guilty of contravening their Environment Protection Licence which requires Bartter to maintain plant and equipment in a proper and efﬁcient condition.

The EPA commenced prosecutions in the Land and Environment Court in October against Forestry Corporation of NSW for allegedly breaching licence requirements in 2018 in Wild Cattle Creek State Forest, inland from Coffs Harbour.

Forestry Corp has now pleaded guilty to these charges relating to the alleged felling of trees and construction of tracks by Forestry Corporation’s contractors in exclusion zones and protected areas, some of which are speciﬁcally set up to protect koala habitat.

“We’re sending a strong message that laws created to protect the environment, and in particular vulnerable species like the koala, must be adhered to,” CEO Tracy Mackey said. Read more

DSWJV are constructing a major roadworks project near Nowra. In August and September 2019, there were three uncontrolled stormwater discharges from the roadwork construction site which polluted a nearby waterway and which had the potential to cause harm to the environment. These incidents were identiﬁed and self-reported to the EPA by the company. Read more

The EPA uses a number of tools to achieve environmental compliance including formal warnings, official cautions, licence conditions, notices and directions and prosecutions. A penalty notice (PIN) recipient may pay the penalty notice, seek a review, or elect to have the matter determined by a court. Through an Enforceable Undertaking, the EPA may secure outcomes such as environmental restoration measures or contributions to environmental projects. The undertaking is enforceable by the Land and Environment Court.

The top areas of offences were:

Our recently updated EPA prosecution guidelines set out the factors the EPA takes into account in deciding whether, how and in what court to prosecute offences under the legislation it administers.

The guidelines now include several new elements to be considered when determining whether or not to prosecute, including the protection of human health. Another new factor relates to environmental justice including the impact on disadvantaged communities or other vulnerable people.

These updates will ensure the EPA continues to be at the forefront of protecting the environment and the community.