From 1 January to 31 May 2020, EPA prosecutions for non-compliance and other environmental offences realised $65,400 in fines and over $102million in environmental incentive programs. Here we feature some case snapshots and the latest action table. 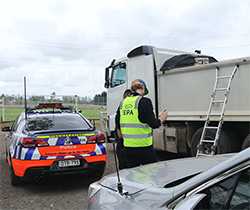 Penalty notices are one of a number of tools the EPA can use to achieve environmental compliance including formal warnings, official cautions, licence conditions, notices and directions and prosecutions.

For example, in May, the EPA fined Tarrawonga Coal Mine $15,000 after an alleged breach of its environment protection licence when a sediment dam failed at its mine near Boggabri.

EPA Manager Regional Operations Lindsay Fulloon said sediment dams are an important part of the pollution control system and they need to be maintained to ensure they work effectively.

“A sediment dam wall breached during heavy rain in February this year, causing sediment-laden water to discharge onto a neighbouring coal mine. Fortunately, the water was contained on this neighbouring site and did not make it to any waterways,” Lindsay said.

In an earlier proceeding, the EPA fined Cleanaway Pty Ltd $15,000 for allegedly storing waste without an environment protection licence. The waste management company was sorting and storing bottles and cans from the NSW Container

In response to action by the EPA in December 2019, Cleanaway stopped receiving waste at the premises and began transporting it to another site at Kooragang Island.

EPA Director Regulatory Operations Metro North Adam Gilligan said it was unacceptable for Cleanaway to put the environment at risk.

“Investigations found that waste was being stored without proper controls near a stormwater drain, increasing the risk of pollution and environmental harm.

“The NSW Container Deposit Scheme is designed to remove litter from the environment, and it is important that the environment remains protected throughout the entire process,” Mr Gilligan said.

HV Operations Pty Ltd has entered into an Enforceable Undertaking with the EPA, paying $400,000 towards environmental land management improvements following a water pollution incident at an open cut mine in Singleton last year.

Adam Gilligan said the alleged water pollution was a result of rainfall runoff from a rehabilitation slope at the Lemington Road mine flowing into a nearby creek which flows into the Hunter River, an activity that could have been prevented.

“The rainfall caused the sediment-laden water to flow into Farrells Creek through holes in a contour bank in a previously mined area,” Adam said.

“The contour bank was designed to divert water away from the creek but it can’t do this if is not properly maintained and erosion has occurred.”

HV Operations will pay $100,000 to a project to improve conservation and management of soil erosion on travelling stock reserves in the Singleton area.

They are also required to develop and implement a remediation plan for an area within the mine site with an estimated cost of $250,000 and conduct an annual inspection of all rehabilitation areas across the mine site, at a cost of around $50,000.

HV Operations is also required to pay the EPA’s legal, investigation and monitoring costs of approximately $30,000.

For more information about the EPA’s regulatory tools, see the EPA Compliance Policy.

Regulatory Action Table for period 1 January to 31 May 2020

Note: COVID-19 restrictions have affected court proceedings with several matters being adjourned to later in the year, hence the financial penalties are much lower than previous periods.