Koppers Carbon Materials and Chemicals Pty Ltd has been convicted and ordered to pay a total of $82,500, following prosecution by the NSW Environment Protection Authority (EPA) for a spill of coal tar pitch and unlicensed fume emissions at its Mayfield plant. 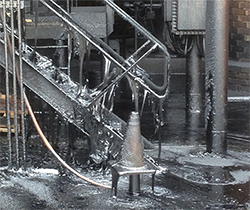 The charges relate to a coal tar pitch spill following a power outage in October 2018, the release of fumes from a pitch storage system on consecutive days in May 2019 and reports of health impacts on members of the local community.

In handing down the sentences, Justice Robson found that the incidents caused harm to the environment and that Koppers could have taken measures to prevent this harm.

Several reports of workers feeling unwell were received by the EPA at the time of the incidents, including one person who reported feeling like he was choking and needed a respirator for breathing difficulties. Another person suffered a sore throat and a headache lasting two days.

Health impacts of exposure to coal tar pitch fumes for a short period of time can include headaches, nausea, irritation of the throat and eyes and coughing.

“The release of fumes such can have serious impacts on the health of people in surrounding communities, as well as on the environment,” Mr Gathercole said.

“The Koppers site has been the subject of numerous odour complaints over the years. We’re working with the company to ensure necessary action to improve the functioning of the fume system at the plant is taken, to help reduce the potential for unlicensed air emissions.”