The NSW Government has updated the rules for how forestry operations can be carried out on State forests and other Crown timber lands in coastal NSW.

The objectives of the IFOA remake were to

Consultation on the Draft Coastal IFOA

The Draft Coastal Integrated Forestry Operations Approval (IFOA) and supporting documents were open for public consultation from 15 May 2018 to 13 July 2018.

The aim of the public consultation was to gather feedback from key stakeholders and the wider community to assist the NSW Government in determining whether the proposed Coastal IFOA conditions achieve the appropriate balance between maintaining environmental values, wood supply and social outcomes in NSW public forests.

Public submissions were invited on the draft Coastal IFOA, and a total of 3,148 submissions were received via email, post and the NSW Government’s ‘Have Your Say’ website. Of the total, 419 were unique individual and peak group submissions and 2,729 were campaign submissions. The NSW government also invited environment and industry stakeholders to a series of regional information briefings.

The EPA is committed to open and transparent public consultation processes. The EPA engaged an independent consultant to prepare a Consultation Summary Report (PDF 1198KB) summarising feedback received from all public submissions and briefing sessions.

In response to public feedback, changes were made to the Coastal IFOA to increase environmental protections, improve operating efficiencies for industry, and improve its clarity and enforceability. These changes are outlined in the Summary Changes to Coastal IFOA (PDF 236KB).

In publishing submissions where consent to make public has been given, steps have been taken to remove the personal information of authors and identifying information where appropriate. In some cases, an author did not consent to the publication of their name or requested that their name be withheld, and these submissions are published under ‘Name withheld’.

The EPA may draw on the contents of the submissions and quote from them or refer to them in publications, although copyright and the views expressed in the submissions remain those of the individual author or organisation. The submissions do not represent the views of the EPA.

The NSW Government prepared a series of supporting case studies, presentations and factsheets to help explain some of the major themes and key changes proposed in the draft Coastal IFOA including

The development of the draft Coastal IFOA was also informed by public submissions received in response to the IFOA discussion paper  (PDF 2MB). The discussion paper was made available for public consultation in 2014 alongside other information, including a proposed framework for forestry regeneration to be incorporated into the IFOA.

The government engaged the Forest Practices Authority (FPA) of Tasmania to independently review the proposed threatened species license framework, and convened  a panel of threatened species experts to review and provide input into the development of ‘multi-scale landscape’ protections for threatened species in forestry on privately-owned and public land.

Additionally, from July to September 2015, the government conducted a trial of proposed settings of the Coastal IFOA in five harvest areas on the mid-north coast.

The Report of the advice from the expert threatened species panel (PDF 268MB) and report on the outcomes of the trial was available for public viewing alongside the draft Coastal IFOA.

In 2016 and 2018, the NSW Government asked the Natural Resources Commission (NRC) to provide independent advice on a suite of proposed Coastal IFOA settings and additional measures to assist the NSW Government in meeting its commitments of maintaining both wood supply and environmental values. The NRC provided two reports to the NSW Government.

The NSW Government provided a Response to the Natural Resources Commission Reports accepting the NRC’s recommended IFOA settings set out in their 2016 report and these were included in the draft Coastal IFOA.

The NSW Government also accepted the NRC’s recommendation to commence a process for improving the accuracy of old growth forest maps in select State forest sites on the NSW North Coast. The NRC will oversee this process and will consult further with the public on this process in 2019. 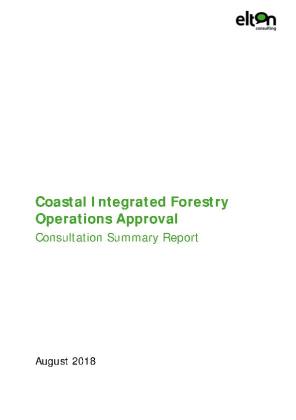 Receive updates on the native forestry reforms or ask a question

Assessment of Threatened Ecological Communities of the Coastal...