The NSW Environment Protection Authority has fined a Sydney truck driver $750 for alleged offences relating to the transport of asbestos waste in northwest Sydney. 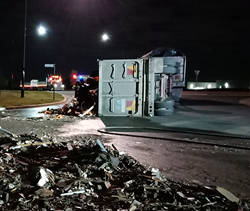 The driver was involved in an accident in July while transporting demolition waste containing asbestos.

EPA Director Waste Compliance Greg Sheehy said the crash happened during the transportation of waste from Kellyville to Marsden Park, after the driver had been turned away from a landfill because his load contained loose asbestos.

“Sampling by EPA officers indicated an estimated seven tonne load was being transported without any evidence of attempts to securely package asbestos material. The EPA alleges that following the crash, demolition waste containing loose asbestos spilled onto the road,” Mr Sheehy said.