Rocky the lobster explains why littering is shellfish in the EPA's marine litter campaign. Don't be a tosser - if your rubbish isn't in the bin, it could end up in our waterways.

Rocky the lobster and his Don't be a Tosser song

As part of the Don't be a Tosser campaign, the marine litter campaign reinforces the reasons to be responsible for your rubbish and put it in the bin, by demonstrating the consequences of littering on land and the impacts on marine life.

The centrepiece of the campaign is the video of Rocky the lobster and his band Rage against the Polystyrene performing their Don't be a Tosser song. The video features marine creatures calling out people who are littering and shows how litter dropped on land can flow into and impact the marine environment. 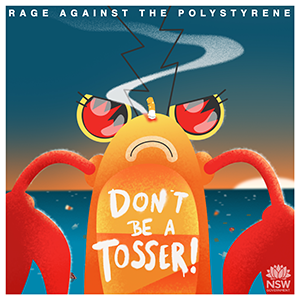 Rocky the Rockstar lobster was a classic icon of the 80s and 90s, best known for his numerous #1 hits “Sea Lice of Heaven”, “It’s a moray (eel)” and “Living La Vida Lobster”.

Rocky has come out of retirement in a comeback as the lead singer of his new band ‘Rage Against the Polystyrene’. The band is making a statement with their hit “Don’t be a Tosser” song to stop litter making its way through gutters and drains into their home in rivers, creeks and oceans.

The other band members are Johnny Splash the octopus, baby seal Krilly Ocean, Rossy Hendrix on guitar, StingRay Charles (actually a seahorse) on the saxophone, Clam Morrison the turtle on drums and Eddie Mercury the fish on keyboard.