The EPA works to keep the environment the way it was meant to be —litter-free. Working with local councils, community groups, businesses and other partners, the EPA targets the most-littered items and locations by providing funding for better bins and litter clean ups, and managing enforcement campaigns to hold litterers to account.

The EPA's litter research shows that 86% of us think litter is a very important issue facing NSW. It's easy to prevent litter every day. You can

Under Waste Less Recycle More, $30 million of additional funding for 2017–21 will build on the EPA's litter prevention work so far. This includes

EPA research shows people know littering is wrong. They know it is socially unacceptable. That is why, if people litter, they tend to do it when no one is looking.

The Hey Tosser! campaign tells litterers they are being watched and that no one likes what they do. The message builds on the successful 'Don't be a Tosser' campaign, run from 2000 to 2003.

Creative materials branded with the Hey Tosser! theme, are available to help you create a litter prevention project.

During March 2017, the EPA released 40 GPS-tracked plastic bottles into waterways across NSW. The results show the community where litter can end up when it is thoughtlessly discarded onto streets, highways and beaches, or into waterways.

Throughout the year, the EPA runs campaigns to raise community awareness and enforce littering laws. To hold litterers to account, council rangers and the EPA issue fines for littering, year round.

Over the 2017 Easter period, in the latest in a series of Tosser Blitzes, the EPA worked with other state government agencies, local councils and companies on a large-scale, statewide campaign targeting drivers along major highways who throw litter on the roads. 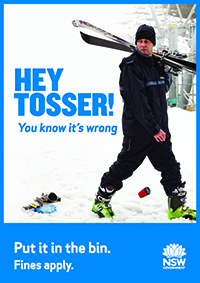 Hey tosser! goes to the snow

During the 2016 ski season, the EPA teamed up with the snowfield operators and local councils to target litter in and around Kosciusko National Park. The park, spanning almost 700,000 hectares of pristine Alpine landscape, is also a popular national ski destination.

To protect this national treasure, the EPA undertook a successful roadside littering blitz in August 2016. The campaign strongly promoted Hey Tosser! around ski fields and roads. It reminded visitors not to litter, to take their rubbish with them, and that they will be seen and fined for littering from vehicles.

In October 2014, during the Supercheap Auto Bathurst 1000 race event, the EPA partnered with organisations including V8 Supercars and local councils to spread the message, 'Hey Tosser! Fines Apply'.

The EPA believes everyone can do something to reduce litter and change litter behaviour in NSW. EPA funding helps local councils and community groups to target our most-littered items and locations.

Read about the grants and how to apply.

Have a look at litter prevention grant case studies for inspiration on what can be done when we work together to reduce litter.

The EPA works with regulatory agencies, particularly local councils, to develop knowledge, skills and resources so they can better enforce litter laws and prevent litter locally.

Training workshops for enforcement officers are conducted through AELERT Professional Development and Training. See the AELERT website for course dates.

Working with Roads and Maritime Services

The Roads and Maritime Service (RMS) is committed to cutting roadside litter toward NSW's goal of reducing litter volume by 40%. The RMS works with the EPA, councils and other stakeholders to create strategies to achieve this goal.

In June 2016, the RMS and EPA collaborated to hold the first Tidy Roads Summit. This event engaged key stakeholders in industry and government, to find effective and innovative solutions to roadside litter and illegal dumping.