Narrabri locals can experience what it’s like to descend deep below the earth’s surface to visit the heart of a gas operation from the safety of a mobile theatre.

The 360-degree Training Theatre, set up in the Narrabri Amateur Fishing Club, aims to increase public understanding of the EPA’s role in onshore gas regulation and provides an opportunity to ask questions.

As the name suggests, the 360-degree Training Theatre surrounds the audience, allowing them to experience what an operation looks like, without visiting an actual site.

The facility was developed to allow EPA officers to train for remote and inaccessible activities from the safety of a controlled environment and is being showcased to the general public.

“Opening the 360-degree Training Theatre to stakeholders and the Narrabri community is part of our commitment to transparent, consistent and efficient regulation of the NSW gas industry,” Ms Spanjaard said.

“Participants are virtually transported many kilometres away and hundreds of metres below the earth’s surface at the click of a button.

“They’re able to study everything from gas well construction and integrity, to how groundwater flows beneath the earth, including potential pollution pathways.”

The EPA welcomes questions from the Narrabri community during the sessions, with transparency an essential part of the EPA’s commitment to being a world class regulator.

The 360-degree Training Theatre is open to the community for multiple sessions on Wednesday 1 December and Thursday 2 December. It will be opened for another week following, pending interest.

For more information on the EPA’s role in onshore gas regulation visit epa.nsw.gov.au 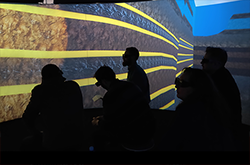