The Hunter River Salinity Trading Scheme has proved tremendously successful and is widely supported by the community that contributed to its creation.

The EPA administers the scheme with guidance from an operations committee with representatives of the community, industry and the government.

Instead of discharging, the mines retained this low quality water to process coal and supress dust, keeping more good quality water in the Hunter for other uses such as agriculture, town water supply and power generation.

This map of the scheme shows the three sectors of the Hunter River, and the associated compliance levels for 2019-20. Each sector was 100% compliant with the salinity goal during discharge opportunities. 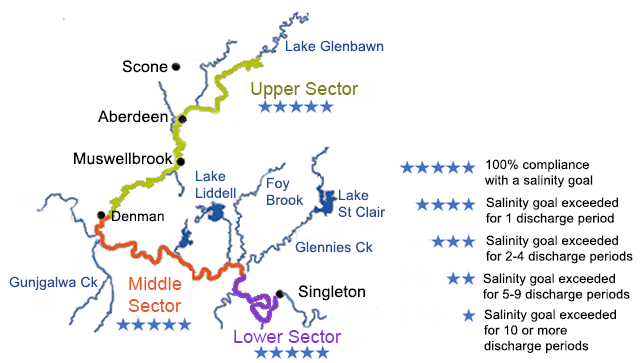 Each year the EPA assesses the performance of the scheme and produces a report.

While the scheme operates to manage salinity levels in the river as a result of industry discharge, occasional exceedances still occur, caused by diffuse sources of saline runoff. New mines can readily be granted discharge licences, with significant economic and employment benefits for the valley.

However, since the scheme started, river salinity has more consistently been below the salinity target.

These improvements have occurred despite a drier-than-average weather pattern since the scheme began. The graph below shows that in previous dry spells (early 1980s and around the turn of the decade) salinity levels were very high. These have not been repeated during the time the scheme has been in operation (which has been similarly dry).

Electrical conductivity at Singleton 1980 to 2002